When I was on the survival course four of us grouped together to reduce the effort needed for fire making and cooking. I soon found out that my nifty folding titanium spoon, which is excellent for camping on my own, wouldn't hack it for larger quantities. A spoon had to be made quickly from the wood used for the fire. No problem, as I had an axe and a knife, so 5 minutes later a multi-purpose but very crude spoon was in use. It worked quite well for stirring, serving and also for eating, and I was impressed by the wood as it worked well, was very dense (despite being a 'softwood') and was even used for poking the fire! 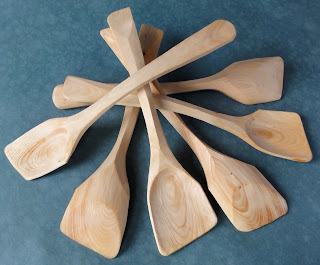 The wood had grown slowly and was very heavy and still green, so, being a keen  carver, I brought some home to identify and make some spoons with. These have spatula shaped ends for cooking, but with sufficient bowl depth to use for serving too. Not quite the multi-purpose spoon as they are too big for eating with.
Turns out that the wood is Lawson's Cypress which I checked with my 1972 copy of Herbert Edlin's 'Wayside and Woodland Trees'. He mentions another variety of Cypress which was discovered near Welshpool by someone called Leyland. It was being widely propagated as it had potential for quick timber production. I wonder if anything came of it?!!!!!!
I only have 6 spoons made from it and probably won't come across any more for a long time. 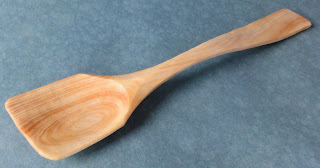