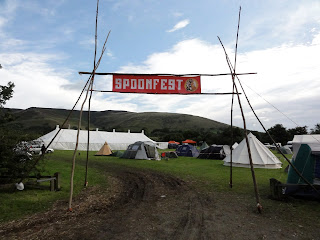 I was there, and I've got the t shirt!
This had to be the best value festival ever. For the same price you would pay on a local campsite there was everything a spoon carving enthusiast could possibly want:- free wood, chopping blocks, inspirational teachers from around the world, food, local beer (after tools down of course), and the friendly company of nearly 200 other spooners. The atmosphere was great and inclusive so even people coming on their own felt involved. Skill sharing was rife and everyone from complete beginners to seasoned pro's had a fantastic time and the friendly atmosphere was infectious.
It's a big step from having a mad idea to actually pulling it off so a big thank you to Robin and barn for doing it and all the volunteers and people of Edale who helped to make it happen.
I arrived on Thursday to help get the party started and make sure the beer was well tested but also to attend the first workshop with Jogge Sundqvist  on the Friday morning. He was booked to do the opening lecture in the evening but added two workshops as well. 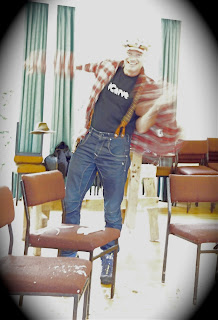 Sorry about the exposure, I wasn't paying attention and the camera was on the wrong setting!
Jogge's lecture was outstanding and worth the visit in its own right. 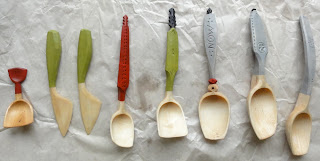 His spoons show particular attention to detail with a lovely finish. I dug deep into my pocket and bought the green and black one above to constantly inspire me! I also bought one of Jarrod StoneDahl's spoons which is a beautiful shape and a typical example of his work.

Fortunately, some of my spoons sold in the spoon shop (below) so I managed to make a small 'profit' over my purchases.

The workshops were very popular and quickly filled up. The demand was so great on the first day that extra ones were put on. This helped by doubling the places available but meant that the tutors missed out on ones that they would have liked to participate in as they were too busy teaching. Fritiof said that he was so tired in the last session that he ran out of English words!
After tea on Saturday night there was campfire singing into the early hours well away from the campsite.

.... but people were better organised for queueing than before .... 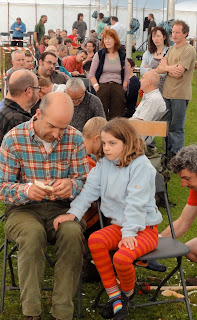 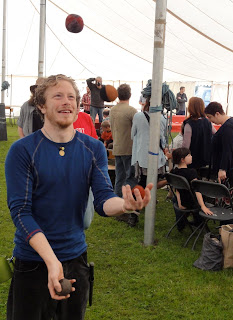 The last hour or so on Sunday saw a special collaborative event which was enjoyed by everyone. Sean Hellman took photos so I won't say anymore as I expect they will appear on another blog soon.
If you didn't attend this event make sure you look out for the next one and register as soon as possible.
Thanks again to all involved for a memorable event.
Posted by Alastair at 20:34