No, I haven't had the paint out recently! These are natural colours created by time. This bent branch spoon is damson from a branch I found which had been cut off last year. The wood was fairly dry and hard as hell to work. The pink is a layer just under the bark so I left it on to show the natural curve of the bowl rim.

This next one is in Hawthorn which is carved green and left for the sap to stain the surface to a lovely golden brown.

Spalting works well with some woods and this Aspen scoup shows very marked colouring after being left in the log for 9 months.

We had a 60 foot Silver Birch blow over in the early summer. The base was rotten and had sent a brown streak up the trunk a short way. There was only enough of this colour that was sound enough to make a few spoons. Easily confused with Walnut at first glance!

Nearly all my work this year has been with 'firewood'. I keep interesting bits to one side for carving. Last week the carving pile was bigger than the firewood pile! Think I need to be more selective otherwise we'll be relying on heat generated by carving and not burning. That's OK for keeping warm but won't get the dinner cooked! There is a lot of spalted Birch which has reached its peak so I am roughing out as many bowls as I can. 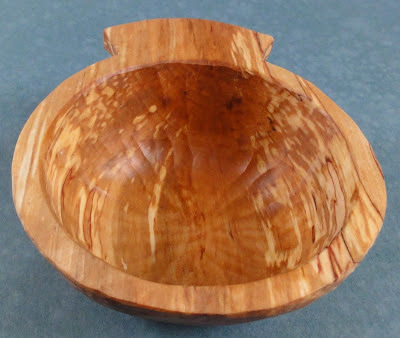